...Intonation and tone quality are excellent with special credit to Montilla for his light and technically brilliant E-Flat clarinet playing. Kenneth A. Long. The Clarinet. September 2017.

…Venezuelan Clarinetist Jorge Montilla shines again with his extraordinary “La Revoltosa”. His sound is beautiful at all times and the performance is both natural and portraits great musical conviction… Montilla’s Eb Clarinet playing is just brilliant. Jorge’s own piece “Registro de Pajarillo" is a jewel. From the first notes one is captivated with the music and Jorge’s both sweet timbre and musical solvency on the Eb. This piece should be mandatory in the repertory for the Eb clarinet. Marco Mazzini. Clariperu, Nov 2011.

…Montilla performs with great enthusiasm and knows how to make the repertoire of his native continent jump off the page with effortless technique, subtle dance accents and tasteful vibrato… Patrick Hanudel, American Record Guide, July/Aug 2010.

...Montilla is a Top-Flight musician – Like Desenne and Dudamel, he is a veteran of “El Sistema”. The music’s many and varied technical demands do not seem to bother him… He plays as if he has this music in his blood… Raymond S. Tuttle, International Record Review, May 2010.

…A particular highlight throughout the concert was the Eb playing of Jorge Montilla. His musicianship, tone, and intonation on this notoriously difficult instrument were a wonder to the ear…  David Niethamer, Principal Clarinet, Richmond Symphony, Washington DC, April 1999.

… Montilla’s arrangements were crafted with such skill to the Caracas Clarinet Quartet that the music sounded easily idiomatic for these instruments…
Joan Reinthaler, The Washington Post Saturday, April 10, 1999.

…Montilla’s arrangements to the Caracas Clarinet Quartet: Perhaps the repertoire of the future… Daniel Granados, The Clarinet, 1993.​

…Jorge Montilla with an exciting performance of the Lutoslawsky’s Dance Preludes…    Penelope Knuth, The Clarinet, February/March, 1991. 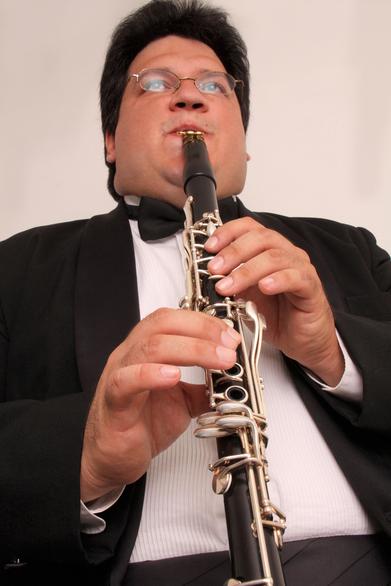 Clarinetist, educator and composer Jorge Montilla Moreno, was praised by The American Record Guide as “somebody who can perform with great enthusiasm and know how to make the repertoire of his native continent jump off the page with effortless technique, subtle dance accents and tasteful vibrato”. His major accomplishments encompass successes in performance, education, and creativity.

Montilla Moreno is best known for being a spokesperson for both Latin American music and the Eb clarinet.

Jorge Montilla Moreno is one of the many fine musicians produced by Venezuela’s “El Sistema”.

Montilla Moreno began his clarinet studies at the age of 10 in his native country Venezuela. A believer in educating younger generations, he has been the Chairman of the Clarinet Department at the Conservatory of Music Simón Bolívar and clarinet professor at the Latin American Academy of Venezuela. In the United States Montilla Moreno’s teaching experience includes teaching at Arizona State University and Longy School of Music of Bard College.

Former Principal Clarinet of the Simon Bolivar Symphony Orchestra, Montilla Moreno was also a founding member and Artistic Director of the Caracas Clarinet Quartet. His many compositions and arrangements have made him one of today's most pre-eminent composer/arranger for clarinet ensembles.

At present, Jorge Montilla is Assistant Professor of Clarinet at the University of Iowa School of Music. He is also a columnist for the International Clarinet Association’s magazine “The Clarinet” and keeps a hectic international career as a soloist and clinician.